A Squared Bowled Over to Socialise Together 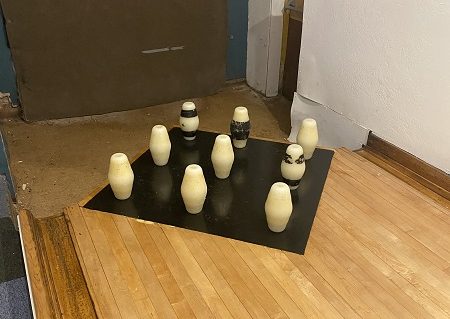 During September all of the staff and management at A Squared Technologies were able to enjoy an evening of skittles and food, here’s what happened!

Monday 13th September had been a long time coming! It was the chosen date given for our first team building event since the first Covid lock-down started in March 2020. The excitement began to build when Government restrictions started to ease on social distancing, plus we had new staff join us over the past 12 months whom we have never had the chance to socialise with outside of work.

Our MD Kate, organised for us to all finish early on the Monday and head over to our local pub The Walnut Tree (which just happens to have a skittle alley) for some food and a few games of “Killer” or “Last man standing” as its also known. Co-incidentally the last time we were able to go out as a group together was also to play skittles and have food. This time however, our numbers had nearly doubled!

Here is how our night unfolded… 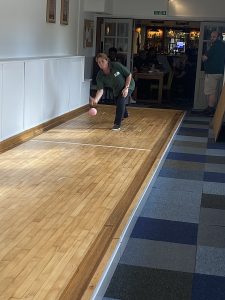 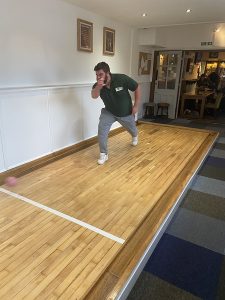 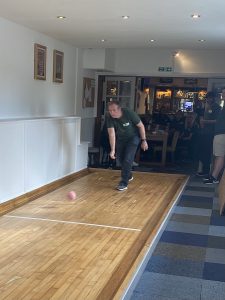 Tonia was straight out of the block firing off her first two shots in style and setting the standard for everyone else to follow. Next we had Dan taking aim for the right hand side skittles and managing to clear a good number of them. This left Andrew having to use all his engineering skills to bowl with precision at just one remaining skittle. 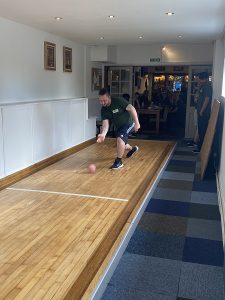 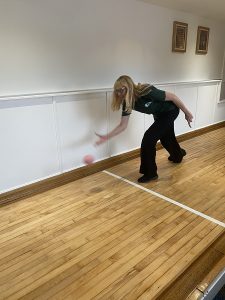 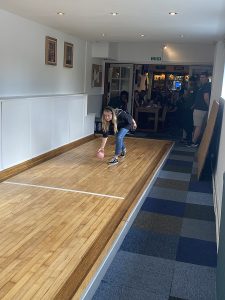 The next three to bowl followed in a similar pattern with Anthony firing straight down the middle, Ann heading for the trusted right hand side and Em getting as close to the alley as she could to target what had been left for her. As the smallest member of the team this was a smart tactic and gave her a unique advantage. 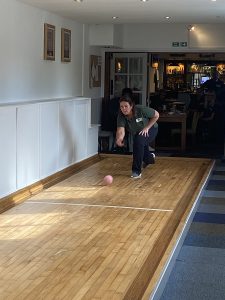 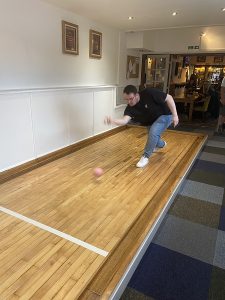 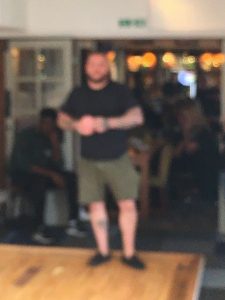 By now the drinks were starting to flow and competition had certainly intensified. Kate had brought her A-game to proceedings clearing all the skittles that lay before her and giving Liam a new rack to aim at, of which he wiped out most of them. Now leaving a near impossible 4-6 split our next bowler launched a howitzer of a shot at the left hand skittle. This completely missed and rebounded off the back wall (and almost through it!) towards poor Will who was standing near by as the “Skittle Marshall”. Even though Will somehow managed to jump out of the way of the thunderbolt we have decided that the offending bowler be blurred out of the shot above to protect his (or her) identity! 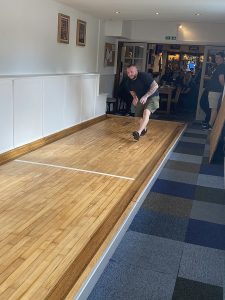 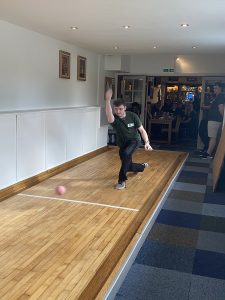 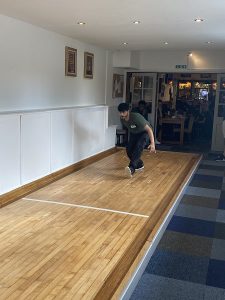 When Jordan won Game 1 with some amazing single pin clearances, we moved into Game 2 and building up our appetites for our impending meals. Martin (no relation to the blurry gentleman mentioned previously of course) danced his way around the skittle alley like a praying mantis and was followed by Jamie, keen to impress those around him with his glove puppet bowling action. Not to be out-done however was Andy, his low action Ninja style taking out numerous enemy skittles. 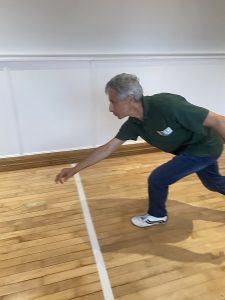 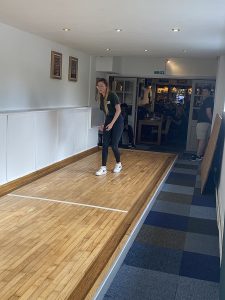 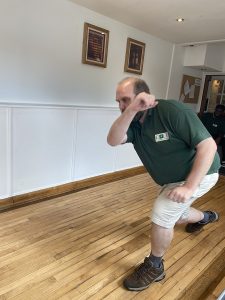 Some incredible techniques were on display by now… Ivan here demonstrating what the Bulgarian Olympic Speed Skating team has been missing all these years with his poise and low centre of gravity! Probably the most skillful player on the night though had to Tia who, with sublime accuracy, managed to bypass every skittle in 3 games without so much as making them wobble. This was in stark contrast to the fore-mentioned Will with his whipped fore-arm smash technique straight off of Centre court at Wimbledon (Emma Raducanu eat your heart out!) 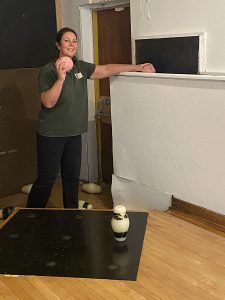 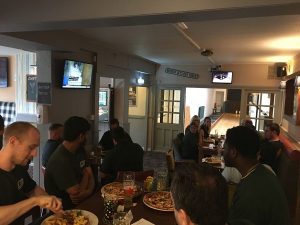 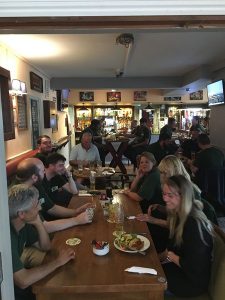 As the luscious food started to arrive we called a temporary halt to the battle and gave Kate some rest-bite from “Skittle Marshaling” following Will’s previous trauma and demands for danger money! With a huge array of food being presented to our hungry bowlers we all tucked in and this was the quietest it was for the whole event! You could tell Game 3 was running through the minds of the competitors though, as each player contemplated winning the accumulated pot of cash. Who would hold their nerve? Who would bottle it after several bottles of grog? Who would struggle to make it onto the skittle alley after eating a humongous pizza? 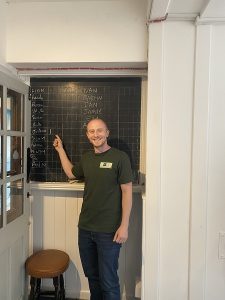 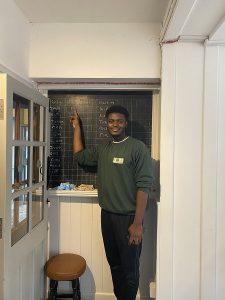 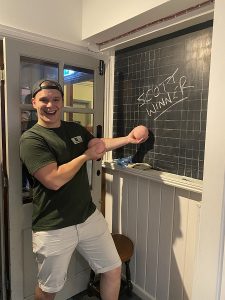 Above are our 3 game winners. Jordan winning Game 1 with some impressive clearances. Paul winning Game 2 despite claiming to have never even played before (hmm no-one is believing that story anymore) with some incredibly dramatic shots. Game 3 however was won by Scott who proved he had the cojones (as pictured) to keep his concentration and cool when all others were stuffed to the brim with food and drink! 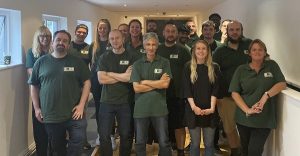 Here is a team shot of all of us together and amazingly all still talking to each other after such fierce competition.

To be out socially after so long was a brilliant thing to be part of and all kindly provided by our ever generous boss Kate.

We can’t wait to do it again, just hope we don’t have to wait so long next time!