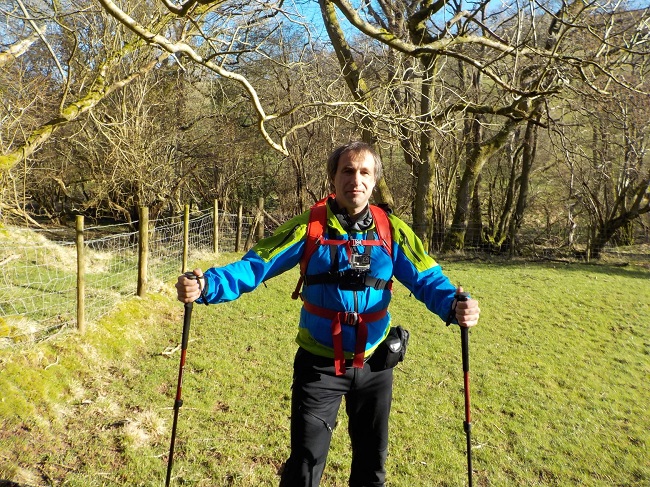 In our previous blog post we mentioned our sponsorship of Teddy Bear Children Support Ltd and the amazing challenge Jamie Donnelly would be undertaking in February, so here is the report into how it went… 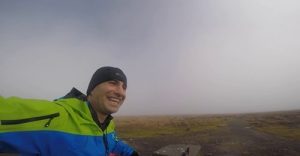 Jamie Donnelly’s Challenge and Expedition was to climb up the Dragons Back route to the summit of Waun Fach which is the highest mountain in the Black Mountains in Brecon Beacons in South Wales. The challenge and expedition was successfully completed on Saturday 27th February 2021 reaching an elevation of 811 meters and in winter weather.
The expedition began at 9:30 in the morning at Pengenfordd and ended at 2:30 in the afternoon at Pengenfordd taking a total of 5 Hours
There were no local experts available to accompany Jamie on this expedition despite in depth efforts to find one, so Jamie undertook a detailed investigation and analysis of the climbing rout and entire expedition coming to the conclusion that given his current knowledge and experience, he would be quite capable to proceed on this expedition alone. 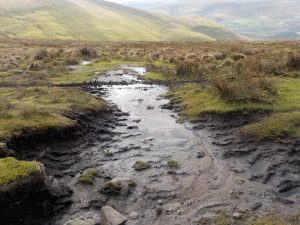 Jamie trekked down to the base of the mountain, the weather in the morning was frosty and quite chilly but never the less the sun was shining bright in the sky, to begin the climb.
Climbing over a stile, he then crossed over a stream which was surrounded by mud! There were a lot of sheep around at this section and the hill Jamie was about to climb was quite muddy as a result of the sheep’s movement on the wet ground.
It was a fairly steep hike up to the top of the first gradient, trekking through mud but it acted as a good warm up. When Jamie reached the top of this section the views were very pleasant and he discovered an old fort castle named Castell Dinas. This Iron Age hill-fort is the highest castle in England or Wales and from this section Jamie could see the Dragons Back route in the distance, as the weather at this stage was very clear with the sun shining bright in the sky.
Jamie was wearing protective clothing from the cold, multiple layered clothing which included a Gor-tex Jacket, gloves and a hat. He had to descend down the mountain to begin the dragons back climb and at the base of this section Jamie had to climb over a gate, this section of terrain was extremely muddy.
Jamie began trekking and climbing up the Dragons Back, the weather was very clear at this stage with the sun high in the sky, with beautiful views of the surrounding countryside and farmland.
When Jamie reached an elevation of about 650 meters he could see a large bulk of mist coming towards him and as a systematic precaution, Jamie got out his compass and allocated his exact positioning for safety reasons. 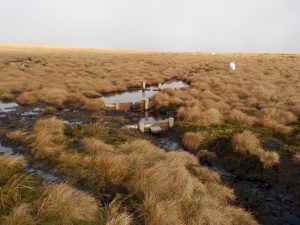 The trek continued up the Dragons Back, after about 15 minutes Jamie reached approximately 700 meters of Elevation at this stage. The mist had arrived both Jamie and the mountain, he was completely surrounded and covered by it limiting his viability to about 10 meters, and at this section, the terrain on the mountain had turned in to a wild moorland. The terrain on this part of the route was a little more challenging as there were very muddy sections, it was black and so wet to an extent that there were large puddles of water in them. This can be quite dangerous for a lone hiker but Jamie continued to press on route trekking through the mist, avoiding and dodging the muddy terrain sections constantly surrounded by an even thicker mist. Added to that was a constant 10 mph wind blowing on this route section as Jamie was on an exposed ridge section of the mountain, which also caused a wind chill! 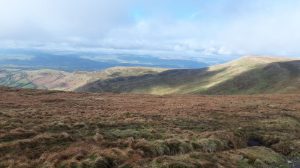 Jamie continued every few minutes to get his compass out to allocate his exact position, he then discovered wild ponies on the mountain! He continued trekking along the ridge completely covered by mist, through the wild moorland, avoiding muddy sections for about 1 hour and finally reached the summit of Waun Fach at 11:30 in the morning.
The summit was covered in mist and whilst Jamie was confirming his exact positioning, two lone climbers suddenly appeared out of the mist walking towards him! The two men agreed to take a picture of Jamie and videoed him holding / putting on display, the Teddy Bear Children Support Flag.
Jamie then began the descent down the mountain and at this stage the mist began to clear revealing the beautiful views. Jamie returned on the exact same route in which he came, finally reaching Pengenfordd at 2:30 in the afternoon. 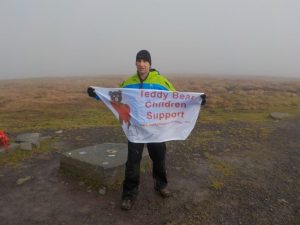 On the road in which Jamie arrived at Pengenffordd the road was partly blocked off, as a result of a landslide!
At the end of the Challenge Jamie felt energetic and strong but just a little tired unsurprisingly. After an orange juice, water and a little food he felt fine and refreshed.
We at A Squared Technologies want to offer Jamie a huge congratulations on his extraordinary feat and are proud to have been able to sponsor him in his work for Teddy Bear Children Support. You can see video highlights by visiting his YouTube page here and can also find out more about what the organisation does by visiting the Facebook page by clicking this link